In 2013 rock singer and guitarist extraordinaire Mick Rogers manoeuvres his musical omnibus „Sharabang“ unerringly on to the RockNRoll-Highway. On his „Sharabang“ his current solo effort, Mick still favors some of the best musical company on his journey. This time around the front-seats of this vehicle are not occupied by his long-time band-members in Manfred Mann´s Earth Band, but by the brilliant and exceptionally professional Bissonette brothers on drums and bass, as well as Matt Rollings on the black and white keys. 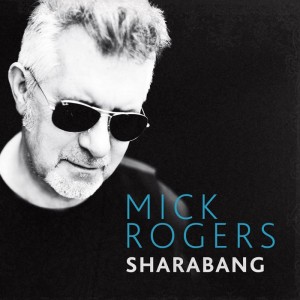 Quite a ways from Mick´s home country, England, the musicians finally make halt at Prime Studio. In the middle of tranquility of the Tirolean Alps, this studio represents one of Europe’s most impressive sound-factories. Amidst this feel-good atmosphere, noble and acoustically optimized recording environment, the Prime-Studio-Founders, producer and main man Mick is supported by executive producers Gerhard Buchbauer and Björn Heitzer. As a team the two of them offer the fundamental navigation assistance to shape a long-player that results in an harmonious mix of Mick´s new interpretation of historical rock songs and of his own signature music pieces.  Along with the production side, sound-engineer, mixer  and Nashville-Legend, Chuck Ainlay, takes over making best use of the well-selected and well-kept Vintage-Equipment of the Austrian studio-complex. His experienced hands take care of fine-tuning the engine bonnet of the  stylistic highly diversified „Sharabang“.

Stand out track „Cutting Me To Pieces“ makes this vehicles body vibrate back to front, care of  the songs lowfy thumping guitar-walls and whipping drums. Then there is the pop-Anthem „Right For Change“. Arranged with romantic strings, Mick questions if there´s a sun ray at the end of this emotional tunnel, travelled on by a pair of  seemingly hopeless lovers or if maybe all curtains have already fallen. The final decision though on wether the time has come to break out of this situation in life, is left to audience by the master of ceremony Mr. Mick Rogers. Still, „Sharabang“ is not an infinite break from his essential passion and past RockNRoll-Days, even though he branches off sound wise here and there. This album is still an emotional ode to his musical roots. Lyrically he takes his audience back to the 50´s when the 10 year-old Mick discovered the „King“ Elvis Presley and soon enough got on the way himself, guitar on his back, to become a rockstar in his own right. With almost the same juvenile ease Mick imposingly demonstrates that his Folk and Country influences have not yet reached their final destination, such as in his own rendition of the Traveling Wilburys „End Of The Line“.

Mick has saved a few seats for his listeners on the bus. With it´s 10 Tracks, „Sharabang“ offers an in-contradicted connection between the past and the future, between the well known RockNRoll-Highway and the stylistic alternative routes. Regardless if one is a Mick Rogers fan or is just jumping on the bus, this album leaves you wanting more.

Manage Cookie Consent
To provide the best experiences, we use technologies like cookies to store and/or access device information. Consenting to these technologies will allow us to process data such as browsing behavior or unique IDs on this site. Not consenting or withdrawing consent, may adversely affect certain features and functions.
Manage options Manage services Manage vendors Read more about these purposes
View preferences
{title} {title} {title}